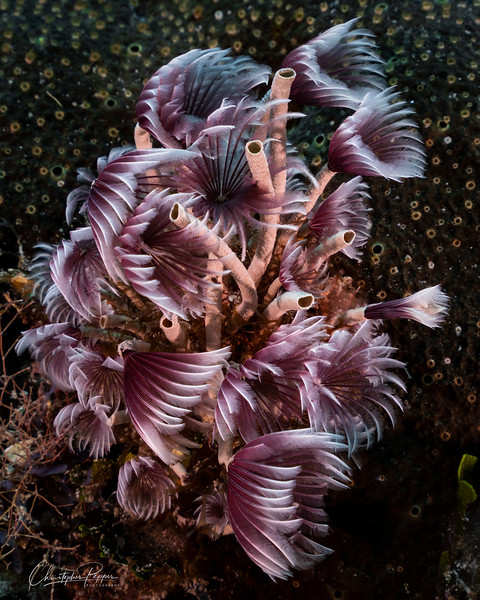 Social Feather-Duster Worms are very small. If you look at this image closely, you can see the various tubes that each worm lives in. These tubes are about the size of a drinking straw and less than 1/4 of an inch across. The worm's head sticks out of the end of its tube. When the worm feels threatened, it will pull it's head down into its tube in almost an instant. Feather-Duster Worms make their tube using calcium-based minerals -- sand, shell, etc.. They will anchor themselves to coral formations, rocks, pilings and other stable surfaces.

A Feather-Duster's mouth is in the center of a circle of antennae called radioles. The radioles form a circle barely one inch across. Each antenna looks something like a feather. Notice that each antenna is folded into a V-shaped cross section. The worm uses its radioles to catch food and to breathe. Ocean currents push water through the radioles, which trap tiny plants and animals called plankton that float in the water. The radioles also work like gills, exchanging carbon dioxide for oxygen in the water, allowing the worm to breathe.